Pokemon Simulation and Me (and You) Pt. 2

Meanwhile, in the world of online Pokemon, more change was afoot. In mid-2002 a simulator known as NetBattle came out. It was a bit of a departure from the web-based PBS and the IRC based gsbot, This thing was an honest to god visual basic application with what appeared to be considerably more polished than anything the wide world of online Pokemon had seen. And in addition, this whole dog and pony show had a built in chat client.

So now we had forums, IRC chat, and chatting over NetBattle. Was the community at risk of being spread too thin? Well, not immediately, as NetBattle seemed slow to win the hearts and minds of the old school competitive Pokemon crowd. For many years NetBattle was derided as a cesspool of low skill players.

Meanwhile, Marble Palace suffered through several hosting changes, and by the time I was finishing up high school apathy was taking a definite toll on the community. One day, sometime in mid to late 2004, one of the main admins posted a topic that said something along the lines of "this is a good pokemon site" and had a link to a place called Smogon. I think it's fair to say that at that point Marble Palace was essentially through. Major bummer.

But what was Smogon? In those days it was a bunch of the 'IRC crowd' starting a discussion board to shoot the shit. (It was also delightfully politically incorrectly festooned with Koffings that had the poison symbol replaced with a swastika, Smogon being the German name for Koffing, of course.) But if Marble Palace was dying and the fine people of Marble Palace were to move on to Smogon, who was I to protest. Remember that I had been born into and raised on the "your message board is your nation" archetype, so Smogon was for all intents and purposes my "new home" lest I become a stateless person.

Soon this all became moot, because I was heading to college. And this marked the beginning of a transition in my life. Pokemon was not this thing to be hidden on the internet. Pokemon Stadium matches would break out left and right in my dorm room. And my fervor about my simulator was at an all time high.

Now you're probably asking yourself, "why?". From when I started programming my simulator, two full-featured simulators, ones that simulated the newest Pokemon games rather than just the classics that I focused on had come out. Meanwhile I couldn't even get something running. Why the heck was I even trying?

For one, I saw neither simulator as adequate. NetBattle only ran on Windows. And we already know how I felt about gsbot. I was high on the idea of doing computer science academically and thought being surrounded by computer scientists would invigorate my drive to program. Plus, I had rethought my simulator as an open source project that would bring the ability to create any sort of Pokemon-like game to the masses. I christened it OPENPKMN.

And thanks to a load of determination, a long winter break, and a general sense of despondence with my social scene during my second semester, in March of 2006, the first OPENPKMN battles were played. To put it nicely, they were rough. How did one play OPENPKMN? You had to ssh into a server (all the interprocess communication was named pipes rather than sockets), run a process colorfully known as pokedump to generate your Pokemon, and then run another process specifying your team, your name, and your opponent's name (which, ostensibly, you'd know in advance). Then you'd pray it would work. When it crashed it would do wonderful things like a change a Pokemon's status from something reasonable like sleep, or paralyzed to something as illogical as "BELLSPROUT", or randomly pull the string "Linux" out of nowhere and assign it to level 137 Wartortle, or allow you to send out unkillable level 0 Bulbasaurs under basically any circumstances. Never mind the fact that there were some pretty egregious problems with some of the game mechanics. All in all, what had four years gotten me? Something less usable and only slightly beyond the feature level of 1999's PBS. But it was something! 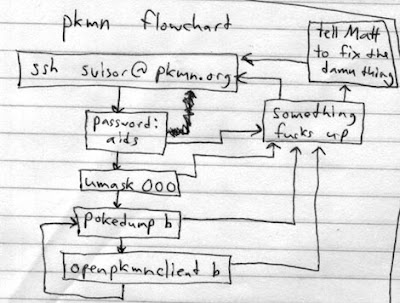 My roommate Ilya, OPENPKMN's second biggest fan, was very instrumental in testing it and exposing some of its more egregious bugs. During a flowchart phase, he created this gem. It's brutally accurate.

WHAT DOES OPENPKMN'S COMPLETION MEAN FOR YOUNG MATTHEW? WILL HE MAKE HIS TRIUMPHANT RETURN TO ONLINE POKMON? WILL ILYA EVER CHANGE HIS PASSWORD TO SOMETHING LESS VULNERABLE TO A DICTIONARY ATTACK? DON'T TOUCH THAT DIAL!
Posted by Matt