Most all kittens are born with some hunting instinct. But a kitten trying to hunt is going to hunt suboptimally, and probably won't be able to kill its prey. And that kitten will grow into a cat that is just inept of a hunter. But if that kitten just observes another cat hunting, however, it will learn the proper techniques.

This is not a kitten, but a world-weary looking dog: 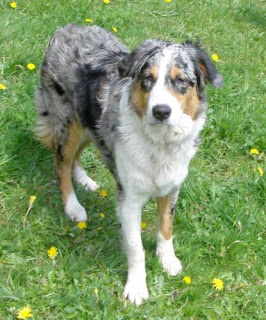 I had this plan after grad school where I'd buy a house in Revere or East Boston. I'd rent rooms out to friends. I'd take the blue line into the city to work. The summers I'd spend hitting the beach after work. Lazy weekend parties with booze and bocce and a crazed dog chasing the balls around.

People were like Matt you're crazed you don't want to live in fucking Revere.

Well I did, because that's what people said 30 years ago when people moved to Somerville or Cambridge. Ten years before that, the best thing people could think of doing with metro Boston was carving it up with highways. It was gritty and cheap. Revere and East Boston were as close to that as you'd get that right now. I was going to get ahead of the trend, buy a cheap old colonial on a hill in an only-ok, working class neighborhood and have the fucking time of my life.

When everyone else wanted in later on, I'd already be there. But I never felt totally cool about the plan. I felt too young for plans like these.

Then there was this one week last October.

I was interviewing for a company sort of on a lark. They weren't anywhere near Boston. This was as close to a hard and fast requirement for a company that I had. I was honestly willing and ready to do any sort of software development. No preference. But I wanted it to be in Boston.

I thought I bombed the interviews, but no big deal. I now work for this company. In Seattle.

How did this happen? I guess I figured I'd make sure I wouldn't be happier someplace else maybe.

When people ask me why I moved to Seattle, I say something like that, with much false confidence. Like it was the plan all along. Nah, it was the repudiation of the plan.

If I were to walk north to the end of my street now, I'd hit East Boston Street. And that's as close to Revere as I'll get.

But maybe that's a good thing. I'm still feeling out an entirely new place and I can't plan and maybe I shouldn't.

I'm just here and I'll figure it out as I go along.

(But I'd still like the crazed dog.)
Posted by Matt No comments:

What is making one Matt Laquidara chortle recently? This ol' website his good buddy Ilya found in an ol' garbage can!

So yeah Matt Laquidara, doing business as twittername @laqoff, does use the twitter brand short style online messaging platform for relaying messages to his peers! Yeah it's dumb and stupid but like please don't stop reading. Pretty please? This online website device makes new 'tweets' out of your existing 'tweets'. 'Tweets' is a dumb word, call them messages or posts please.

I have used this on my posts and gotten some pretty hilarious results in my opinion. Not only that I've DRAWN some of them using computer technology because I can't sleep!

You may click the images to make them larger! But not too much because it will burn out the internet computer's biggen-coil!!!