Giving video games another try: Pokemon? On the internet?

I have cheated on the only thing I have ever loved.

As you might know--as I bring it up all the time with this horrifically false shame, both in the blog and real life--I programmed a real life, honest to god, classic Pokemon battle simulator. In its heyday it boasted single digits of active users with an whopping two battles occurring at once. It was the best Pokemon simulator no one ever used. As of now, however, it's dead.

But it was a Friday night, I was worn out, bored at home, and feeling the urge. So I installed a little program called Pokemon Online and started some real live classic Pokemon battles on the internet!

Upon opening the program feelings of confusion and perplexity washed over me. There were menus and buttons and all manner of things! I recalled the frustrating confusion of people who tried using openpkmn (IT EVEN SAYS TO CONTROL-CLICK TO SELECT MULTIPLE MOVES JESUS H CHRIST) and tried to put my best foot forward. After looking through the menus for fun, I clicked on the "Teambuilder" button.

This was where I was to set my name! Not intuitive! Also I was to click on squares that signify my Pokemon in order to make them. This involved more clicking on all manner of things, including going into a menu to change the generation to Red/Blue! I made a god awful physical attacking team because I felt that would be novel and I'd catch some horrible new age Pokemonist by surprise with my crazy old man skills.

When I was done this I clicked the "Close" button.

"Go Online" seemed like the button to hit next, so I did that. Golly gee what a chat window. Hundreds of people! A chat window! I averted my eyes from the dialog and imagined them discussing great works of Greek philosophy or favorite Built to Spill albums or something.

My attempts to set my Rules to RBY OU (That stands for "overused"! Don't ask!) were stymied by the fact that my team needed to be made under Yellow rules to be eligible. So I had to go back and change my team. Then I hit the "Find a Battle", put on some Neil Young, and waited.

Not long after, I was accosted!

The battle was nothing to write home about, except oh my opponent's sprites never showed up! That was annoying, but otherwise the interface was pretty nice. I lost!

So I went back to that team builder and made a new team. With a Victreebel on it, no less!

Going back to the chat window/battle apparatus I found my team no longer there! In this computer game, you need to explicitly save your games instead of having them automatically saved on a server! Boo, hard working Pokemon Online developers! Hiss!

After that point I was invincible! I won like three battles convincingly. Then I got so lucky in one battle the guy quit! Then some guy I already fought challenged me and I was like 'I retire' and peaced from Pokemon for the evening!

So this thing was pretty neat, namely because real live people were on it they were active active and it has a "Find a Battle" feature that hasn't been sitting around half-programmed since I was a grad student. But, like a common whore, there were some definite downsides. The rule configurations are limited to really coarse sets based on tiers of Pokemon. You can apparently switch to stadium mechanics (suck a dick, broken Focus Energy mechanics) but the evade clause* is always going to be in effect because socialist nanny-statist Obama thinks we cannot make decisions for ourselves and play non evade-claused matches against like minded individuals. Granted non evade-claused matches can be really tedious, but like freedom or something. Well at least they have tradeback moves as an available option**. Yeah.

They carried them
To the flatlands
And they died along the way
But they built up
With their bare hands
What we still can't do today.

Educational Programming
*In Pokemon you can use moves that up your "Evade", or, in real people words, decrease the opponent's chance of hitting your Pokemon by a multiplicative factor. People don't like this because it makes the game "too luck-based", but people also have no idea of what the long view is. Seriously, it evens out. Sample size. Sample size. Stop.
**You can trade a Pokemon from second generation to first generation games if that Pokemon and all the moves that it has exist in the first generation game. However, the second generation games alter what moves Pokemon can learn, making for some interesting move combos that do not exist in the original games. Confuse Ray/Thunderwave Starmie, mostly. Look it up, it caused much gnashing of teeth in the early portion of this century.
Posted by Matt 2 comments:

Wherein the author makes food that cannot be easily identified 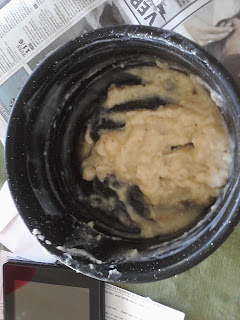 Right on A Street
Straight onto Concord
Right on Summer
Left on Beacon
Left on Hastings
Right on Woodward
Right on Old Connecticut Path
Turn left, cross route 30, and go through the Bella Costa parking lot
Right on Concord (again)
Right on Corregidor
Continue on Arsenal
Right on Normandy
Left on Flagg
Right on Warren
Left on Forest
Continue on Nelson
Cross Union and continue on Otis
Right on Franklin
Right on Newton Place
Left on Day Hill
Posted by Matt No comments: