But I do think about leaving Seattle, this city that I really like very much. This is, in all likelihood, the best place I've ever lived. When I think about leaving, I don't think of returning to a place I've lived before. I'd leave to live in some city I've never even been to before. And that factor is really important, because it gets me closer to living up to my potential.

Now "living up to one's potential" sounds like some bullshit, but I'm going to assert it's some real measurable thing in my mind. Fulfilling one's potential involves a strange sort of retroactive satisfaction with one's accomplishments--a sort of 'I really actually did that?". It's a departure from one's comfort zone. It's a way I feel about first moving to Seattle. I only knew one person, but I've since built up a reasonably sized network of friends that I genuinely care for. To do this involved a pretty radical change in character, a willingness to plan, a comfort with asking people who I'd talked to once to join us for beer, and accepting the possibility of spending a Friday in a bar with only a newspaper and a bartender for company.

But with a group of friends in place, I don't really feel I can do such things anymore. It's not just I wouldn't care for it, my mental approach has shifted and I when I meet new people I don't actively think about converting these chance meetings to friendships, as I used to do. Moving isn't the only way to reawaken this feeling, but I'm not sure there's anything like it.

So I've thought, if I really wanted to live up to this ideal of maximizing potential, I'd move around a lot. Aside from the finding relentless pursuit of personal best to be somewhat obnoxious, the problem with that is that it forces the deprivation of another important feeling: comfort. Being in a familiar place, a very nice familiar place at that, brings a very real satisfaction. Having to seek out new people, having to worry about the process of furthering acquaintances to friends, that's incredibly tiring for me. As much as I'd like to, I derive considerable comfort from not having to.

But the real point here is that neither making moves to live to one's potential nor the comfort of continuity are more important or better than the other. It's stupid and ultimately dissatisfying to optimize entirely for a single one. The dependent variable is happiness, and it depends on both (and to be fair, many more things). Happiness is what's important, and that comes from maintaining the correct balance of the underlying factors.

I'm just rethinking the ratio a bit and I don't think there's any harm in that. Maybe the balance has swung too heavily one way, and needs a push in the other direction.
Posted by Matt 2 comments:

Legitimate content in progress, but some things are too good to pass up just as is. 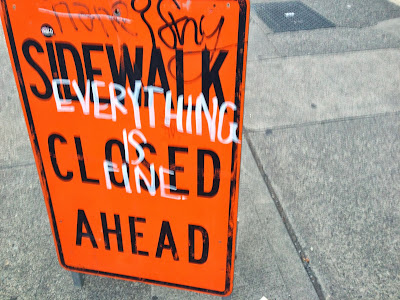 You're bored.
Posted by Matt No comments:

Places where the author has slept poorly, if at all

Airplanes
There's nothing about airplanes that even suggests they're a place where sleeping is possible. Nothing. First, they're quite loud and the noise that they produce is that variable. Second, they're in the fucking air. They bank, the shake, they change speeds. If that wasn't bad enough, you're literally shoulder to shoulder with hundreds of perfect strangers. What other primate could handle being this many of its kind in this enclosed space? None of them. None the fuck of them.

So why do people keep asking me if I slept on the plane?

No I didn't. But not through a lack of trying. I changed every leg to window seats so I could lean against the side of the plane. I tried lying back, I tried lying forward onto the tray table. But in every case, as soon as I was on the cusp of sleep I darted awake. One time, I got far enough into sleep that I started to dream. However, in the dream I immediately started choking. Predictably, this woke me up and I was foiled yet again.

I'm convinced, people who can sleep on planes may have the advantage now, but they wouldn't have lasted a fucking day as cavemen. You're 35,000 feet in the air! That's wrong! You can't sleep during that! If that's not a enough to wake you up, a sabertooth tiger is going to eat you and all your babies. You'll be dragged away by your hair!

So nice work fuckers. You win this round, but I'd be such a better caveman than you.

The entire nation of Germany
I've been in Germany three times, average duration about a week apiece. I've stayed at three different hotels. In each of those trips, I've averaged no more than four hours of sleep per night.

It's not a timezone problem. I've been in Central Europe Time multiple times and actually while in Italy I had by far the best, most absolutely peaceful and deep sleep of my life. Even in France, when I was in a crappy hostel, I slept well.

I think part of the issue is the German bed, which I'm convinced, is in every way the most inferior bedding solution devised by anyone, anywhere, in the entire course of human events. The German bed has a thin foam mattress over slats instead of a box spring. That part is ok. The bed is made with a fitted bottom sheet, again no issues here. But rather than having a top sheet and blankets, you are instead given a you-sized rectangle of comforter material called a decke. This is under what you are to sleep.

This sucks sucks sucks sucks sucks. The assumption totally is that you'll lie under your decke, absolutely still, and sleep. However, for me, every night is an odyssey wherein I find myself moving from side to side and taking on all sorts of new and exciting contortions. The decke just can't keep up.

Seriously Germany, the decke is a joke. Cut that shit out.

Hardwood
Hardwood is very uncomfortable to sleep on.
Posted by Matt 1 comment:

There's something out of place about them, the cement mixers with "building a concrete future" written on the side. They seem like they belong in some sort of dystopian fiction, agents of some faceless organization erecting drab, soulless buildings with a villainous lack of remorse.
There's also something out of place about a walker and a cane left in the strange junk pile of the laudrey room. At first I thought I meant someone got better, but thinking more it has to mean someone died.
Posted by Matt 1 comment: