Game Summary
Los Angeles Angels of Anaheim defeat the Oakland Athletics by a score of eight to one. Scott Kazmir of the A's gives up six runs in the second inning, including walking in two, maybe three, runs before being lifted from the inning. Matt Shoemaker continued to excel at baseball at the expense of his nominal craft, giving up no runs over seventh innings, but also making zero shoes. Other meaningless runs were scored off of largely unrecognizable relievers on both sides. Remember when the names of relievers didn't surprise you? I do.

This win probability graph was egregiously stolen from FanGraphs to summarize the game in a numerical fashion: 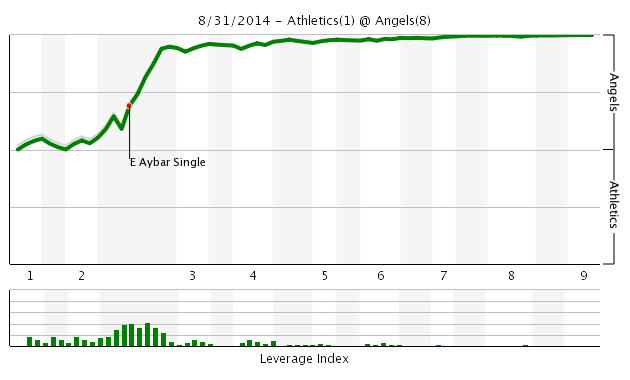 With the win, the Angels have a five game lead in the American League Western Division.

Rooting Interest
Angels. Sorry A's, I like the recognize undervalued talent and succeed on a low-budget model over the pay out large sums of money to players that used to be good also draft the best player in baseball model, but not enough that I'm going to stick my neck out for you in someone else's house.

The Stadium
Angel Stadium of Anaheim is ringed with parking lots. Whereas many stadia create a lively atmosphere pre-and-post-game on the surrounding streets, this is not an option here. Instead, pre-game festivities are largely limited to standing in line and post game festivities seem to largely involve sitting in traffic and locating one's car in the parking lot.

Your parking pass has a small area to write where you parked, but there do not appear to be any sort of labeling in the parking area. So I did the next best thing and took a picture of the stadium from where I parked, hoping it would allow me to generally gauge where I would be. 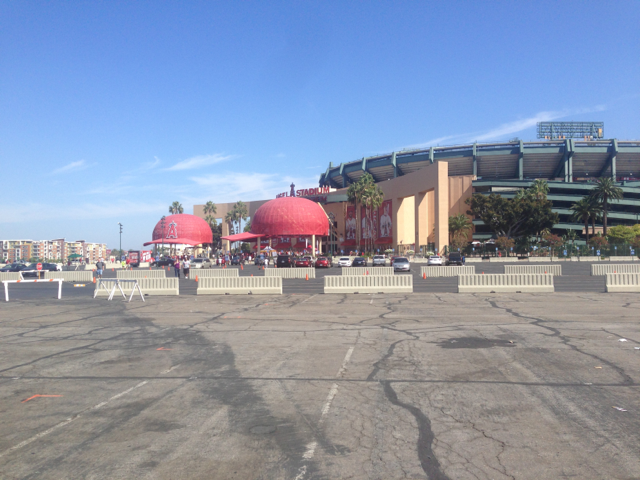 Observe that one hat is pointing towards you and the other is perpendicular to the imaginary line between you and the former. To understand the issues with using this image to locate your car, imagine you can rotate the image about the Z-axis. Now rotate the image 90 degrees (π/2 radians) to the right. Now combine that with a misconception that cameras reverse the image that you see. Search for your car in entirely the wrong lot. Later observe that the apartments on the left appear to have been replaced by mountains and a freeway. Now, go to the other parking lot and find your car.

The Seats
Three rows back from the field, just past the right field foul pole. How these are $15 seats is beyond me.

One activity that I have grown to enjoy is baking in the sun. These seats were absolutely perfect for generating a good thorough sweat, with just enough breeze to not be overwhelmed. My skin enjoyed this activity far less.

The Food
As an All-American gentleman I enjoyed an All-American baseball fan's meal of a hot dog and a Bud Lite. The fact that craft beers were being sold for $12.95 may have had something to do with this. My Washington license was greeted with sheer glee from the cashier, who had seen many out of state licenses on this day.

The Fans
Fans were fairly sedate overall. Many showed up late. Angels fans outnumbered A's fans probably about 10 to 1.

Things got more boisterous later in the game, when A's right fielder Josh Reddick repeatedly had his name called in a distracting fashion (Jossssssshhhhh, Josssssssshhhhhhh, Josssssshhhhuuuuaaaa) by Angels fans. He was also implored to check his glove by these same fans, largely because he earlier happened to look at his glove.

Things were further escalated by the arrival of a midriff-baring, heavily sun-damaged, middle-aged woman. While imploring the child in her care to use a cardboard cutout of Mike Trout's head to shade himself from the sun, she informed us the fans (and Josh Reddick, repeatedly) to 'break out the brooms' because our Angels were on the precipice of a sweep. An Oakland fan getting kicked out of the game was also well received, so much so that mustachioed usher in a Panama hat had to give several Angels fans what looked like a terrifyingly stern talking-to, presumably when they said something uncouth to the departing man.

An Observation
The ball attendant warms up the right fielder in this Stadium, presumably because neither the bullpens nor the dugout is close to right field. This leads to an odd scene when the opposing team is in the field. 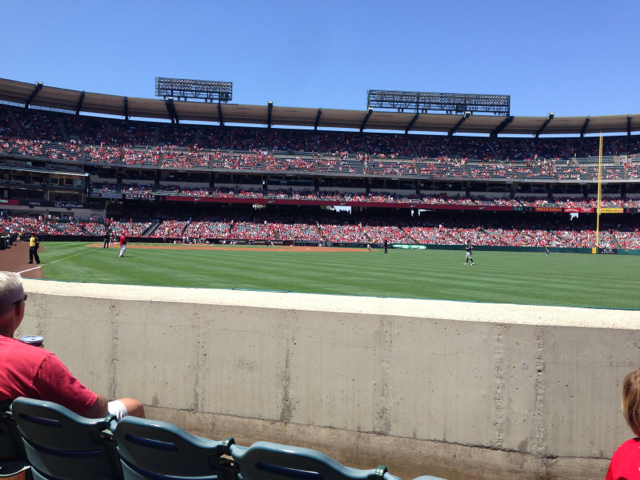 A Missed Opportunity
You will probably see the following image, and think of it as being of no importance. 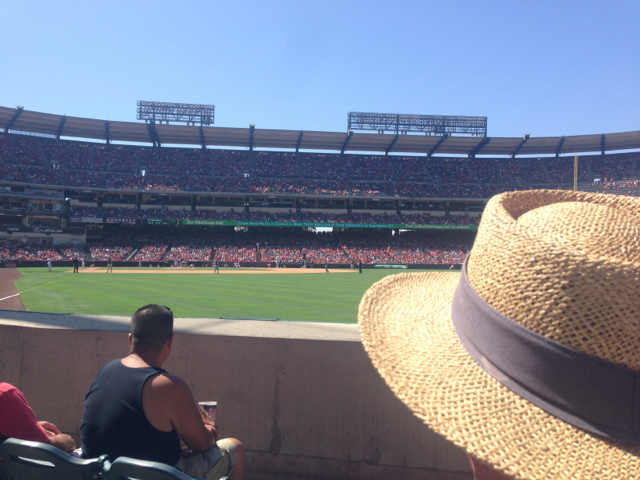 But then you use computer technology to magnify it.

And you realize your author has missed his big chance.
Posted by Matt

Labels: Baseball, beer, first rate sports publication, Food, novel use of cardboard cutout, this one has a graph in it