Game Summary
The San Diego Padres walk off and defeat the Diamondbacks by a score of two runs to one run! Pinch hitter Cory Spangenberg hits a walk off homer with one out in the bottom of the ninth off Brad Ziegler.  But before that happens, a man named Odrisamer Despaigne starts for the Padres opposing a man with the considerably more spellable name of Wade Miley. Other than Miguel Montero driving in Cliff Pennington for the Diamondbacks and Alexi Amarista driving in Rene Rivera for the Padres, and an inning where the Padres had runners and first and third and with no outs but neither scored, the game was a quickly and crisply pitched affair by the starters and a bunch of again remarkably anonymous relievers. 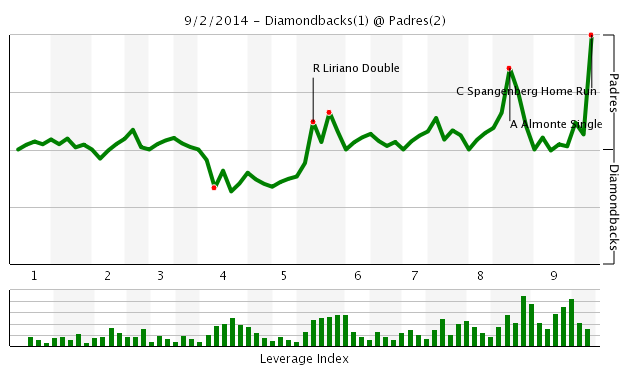 The Padres and Diamondbacks and third and fourth in the National League West, respectively, and considerably back the Dodgers and Giants. Whether either of them is in sniffing distance of the wild cards is not something I'm going to bother looking up. Who cares?

The Stadium
Excuse the gushing, but this is basically the perfect baseball park, maybe. It's located in what appears to be an erstwhile warehouse district that now appears to have businesses and apartments abounding. There's a trolley line that stops right outside the park. Even for the car-bound like myself, I was able to park at a meter in what looked like a slightly more run down part of town, pay a quarter, park for the whole game, and need only to take a 10 minute walk before and after the game. Take that, Anaheim.

The park itself is slightly subterranean. The area around the park is access-controlled and your ticket essentially lets you into a plaza with the ballpark in the middle of it and various vendors and activities surrounding it. To find your way to your seats, you walk outside the stadium in this plaza, as the various areas of the stadium do not appear to be fully interconnected on the inside.

After the game, the neighborhood around the park appeared to be busy with people enjoying bars and restaurants. I had to drive an hour and a half back to Costa Mesa and was unable to partake in said festivities.

In an entirely uninformed and most likely incorrect opinion formed over perhaps six hours spent in the city, Petco Park indicates to me that San Diego has acknowledged that car dependence is an unsustainable problem and at least some surface level measures are being taken to combat it.

The Seats
I was in the front row of a section called the Toyota Pavilion which is one deck above the field level. This section is on the third base/left field side. The seats are smartly angled towards home plate, minimizing the amount of neck craning that must be done. 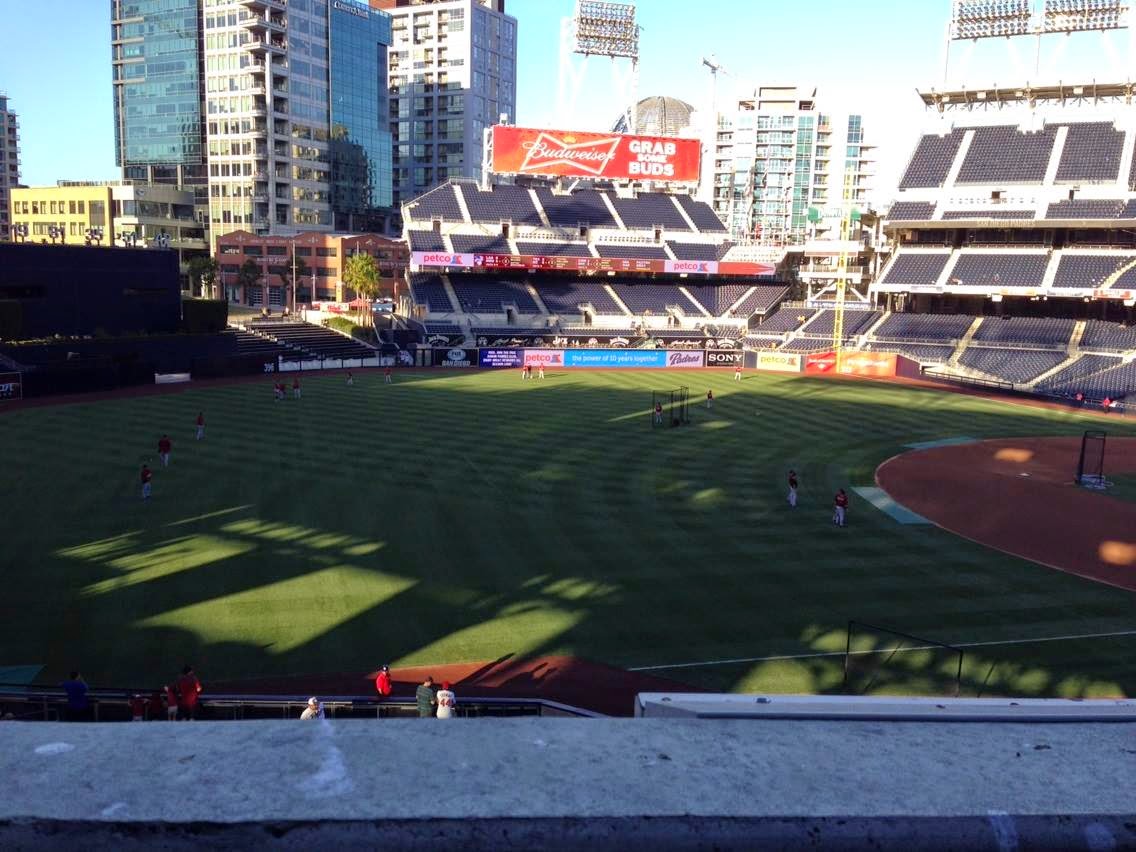 Though the sun was still out at the 7:10 PM start time, the seats were nice and shady. This was actually nice due to a prior day's sunburn. The temperature, as I'm lead to believe it's wont to be in San Diego, was perfect.

The Food
I was pretty full when I got to the ballpark, having indulged in tacos earlier in the day. Nevertheless, by the eighth inning the allure of ice cream grew to be too much. One giant vanilla chocolate swirl soft serve later, I was sated.

Though I debated getting my soft serve in a plastic cap, I relented because having two plastic baseball caps would cause too much temptation to get two dogs rather than a more reasonable one dog in the future, as the proper resting place for a plastic baseball cap is clearly on the nearest dog. 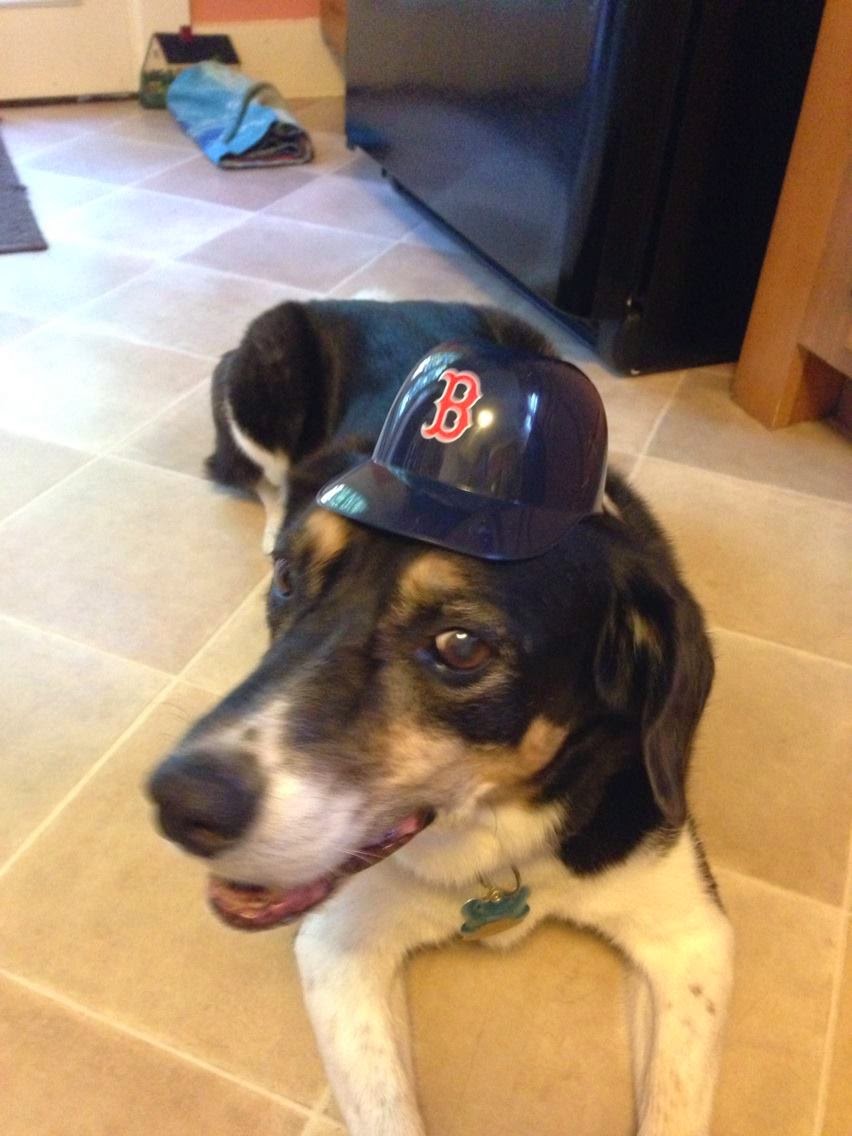 A dog wearing a plastic cap that at one point contained ice cream.

"But, Matt," you ask, "aren't those miniaturized batting helmets, not caps? After all, they, like batting helmets, are constructed from hard plastic rather than a cloth blend." No, you are, unfortunately, incorrect. After all, if they were batting helmets they would would have an earflap on one or perhaps both sides. If anything, they are most properly described as John Olerud helmets. 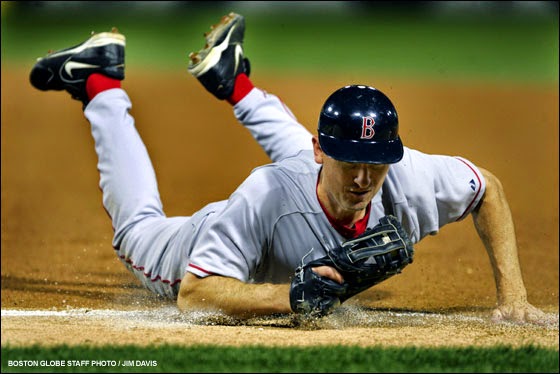 A man wearing a plastic cap that at no point contained ice cream.

Seated next to me was a teenaged girl and her father. She appeared to be quite passionate and knowledgeable about the following baseball and the Padres' players and history. She carried on a running dialog on basically everything that happened in the game with her father, who would occasionally respond, but more often with herself.

A feel bad about having this feeling, but I pretty strongly dislike when people are passionate and critical about baseball while also being poorly informed about the analytics of it. Like calling an intentional walk a good idea because the batter was one for three in the game (minuscule sample size!) rather than merely getting a handedness matchup. Or using batting average to criticize a pinch hitting choice (really incomplete information!). To me, being critical while possessing considerable misconceptions shows a lack of self-awareness about the degree of one's knowledge. If you don't care be knowledgeable of what factors correlate most with winning games and the amount of uncertainty each of these factors have, you're of course welcome to enjoy the game, but you're not really in a position to criticize the decisions being made on the field, even if they are incorrect. Question your assumptions, do research, learn, and just enjoy the spectacle.

And honestly even if you do remain at the forefront baseball research, being overtly critical of the players and decisions is still in poor taste. Even the most current baseball information is sure to have glaring flaws. Plus, you're watching people who are the absolute top of their field being pushed to their biomechanical limits, and you're criticizing them for making one mistake or misjudgment in a career that will result in thousands of chances at redemption? It just seems so unwarranted.

At the same time, though, if being critical is how some people people enjoy the game, why am I being critical of them? Maybe it's just fun to scream at millionaires.

But that's kind of a critique of baseball fans in general. Padres fans are great, largely because at this game the wave was not performed at all. This may be a first. Labels: Baseball, first rate sports publication, Food, picture of a dog, Pokemon, this one has a graph in it
Newer Posts Older Posts Home
Subscribe to: Posts (Atom)