The fuckityo.com computer website for people wishes you happy holidays 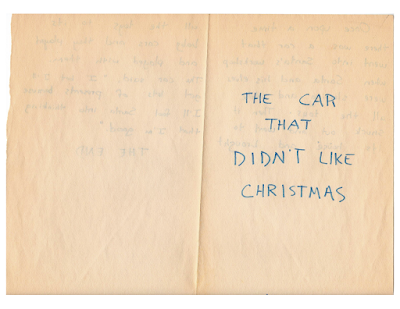 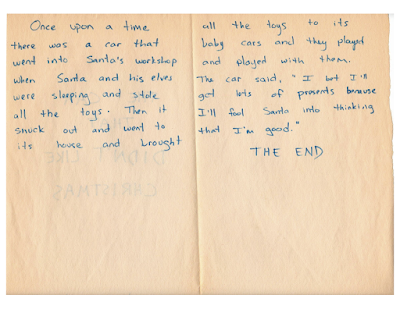 Last time that I was at my parents' house I did something I had been meaning to do for awhile. I forget whether I was in preschool or kindergarten at the time, but I had caught the chicken pox. To pass the time while I was at home—presumably fairly unhappy with the state I was in—my mother transcribed stories that I told to her. Though these stories have been revisited many times since, I have wanted to scan them for quite some time.

My mother was a very faithful and objective transcriber; I think The Car that Didn't Like Christmas is a fine example of that. Here's a story where the protagonist totally subverts the meaning of Christmas by looting the north pole and, unsatisfied with that haul, plots further trickery for even more material gain. At least the car in question distributes the toys to its...baby cars? Cars were typically the central characters in these stories. I was obsessed with cars, but not for the typical reasons. I wasn't interested in them because they were fast or mechanically complex; I believed cars were alive and lived just as vibrant lives as people did. I even believed I was a car, just emitting a holographic image of a human being. (This belief is most likely due to a combination of the Transformers cartoon, the movie Herbie Goes Bananas, and one or two episodes of Star Trek Voyager. I also believed I hatched from an egg, but that's of limited relevance here.)

I think I kind of knew that this belief in living cars was not logically tenable, even as a preschooler. I think I really strongly hoped that against all odds, it would in fact be or become true. If I were a car, that would make me different from everyone else and as a kid I passionately embraced the notion of being different. What better demonstrates that than a story about a sentient car who hates the holiday typically most beloved by children?

I don't think there's a problem with nonconformity. What I did as a young kid, though, was to start with being different as the fundamental axiom and build my reality and interests on top of that. I disliked things arbitrarily if they were popular enough: Christmas, sports, dogs, cats, and all of the Ninja Turtles. In retrospect it was a weighty, self-imposed burden.

I feel as though I still carry bits and pieces of what The Car that Didn't Like Christmas could represent. I feel more awkward discussing shared interests with people than I do mocking (good-naturedly, I hope) something that I know other people enjoy. Overall, I think I've tempered most of the nonconformity for its own sake, and am happier for it. Then again I used to think I was a car so how self-perceptive can I really be?

What's not in question: the car that didn't like Christmas is a little shit.
Posted by Matt